In ” Death by Chocolate Cooking Class” I referred to the moelleux au chocolat that we made, but didn’t give the full recipe, and forgot to mention a key debate that came up in the class. What in the world is the official difference between a moelleux and a fondant au chocolat?? It feels like restaurants in Geneva have a tendency to use moelleux and fondant interchangeably on their menus. In my mind, the answer is in the name: a moelleux is gooey and unctuous in the center, but not runny like pure melted chocolate. A fondant (literally french for “melting”) does in fact have pure melted chocolate in the center, which runs a little when you get to it. Like a molten lava chocolate cake, for the americans among us. 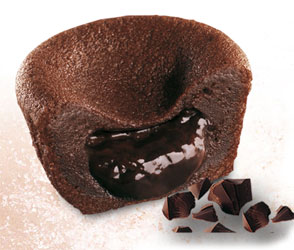 In terms of recipes, the chef was pretty clear on what the difference was. A fondant follows pretty much the same recipe as a moelleux, except in the center you put in a dollop of ganache or a piece of chocolate. Since there is no flour in that part of the mixture, it doesn’t bake, it just goes all gooey. Yum right?

A moelleux on the other hand can bake all the way through, if you leave it in the oven long enough. So, since I skipped out on all this last time, by instant popular demand (read: one person suggested in passing that I post it), here is the recipe for the moelleux au chocolat that was developed by the instructor, Chef Brett Solochek, and that we used in this week’s chocolate class:

What next?
The verdict:
This recipe gave a really rich, unctuous, but extremely runny moelleux au chocolat. Now, as a Genevoise at heart, I have to be honest and say that as delicious as these were, they just were not moelleux enough for me. Maybe if they were left in the oven for another few minutes, the center would have been moist and unctuous, with just a little bit of melted runny chocolate in the center. Which, if you ask me, is the what a proper moelleux should be like. Moelleux. NOT fondant! But ultimately, this is a question of taste I think, so taste test yer hungry little hearts out, and let us know where you stand!

One thought on “Moelleux vs Fondant au chocolat”